On the 6th day of mantra Anusthan, I would like to introduce another shinning sun of my Guru Mandal (Circle of Gurus) who nurtured and spread the Shri Vidya Reet for hundred of years. This my tribute to the Guru Mandal.

Shri Ganpatram Dave was  the Guru of Shri Vidya Kashi Pashupat Parampara, who started to spread the Vidya (knowledge) to the worthy ones across the Gujarat. He was the Guru of very popular world famous singer Pandit Jasraj. He is my Paratpar Guru. His son Shri Vasudevbhai installed Shri Yantra in Ambaji temple (http://www.ambajitemple.in/). Which is a biggest place of pilgrimage in Gujarat state for Shakti worshippers. 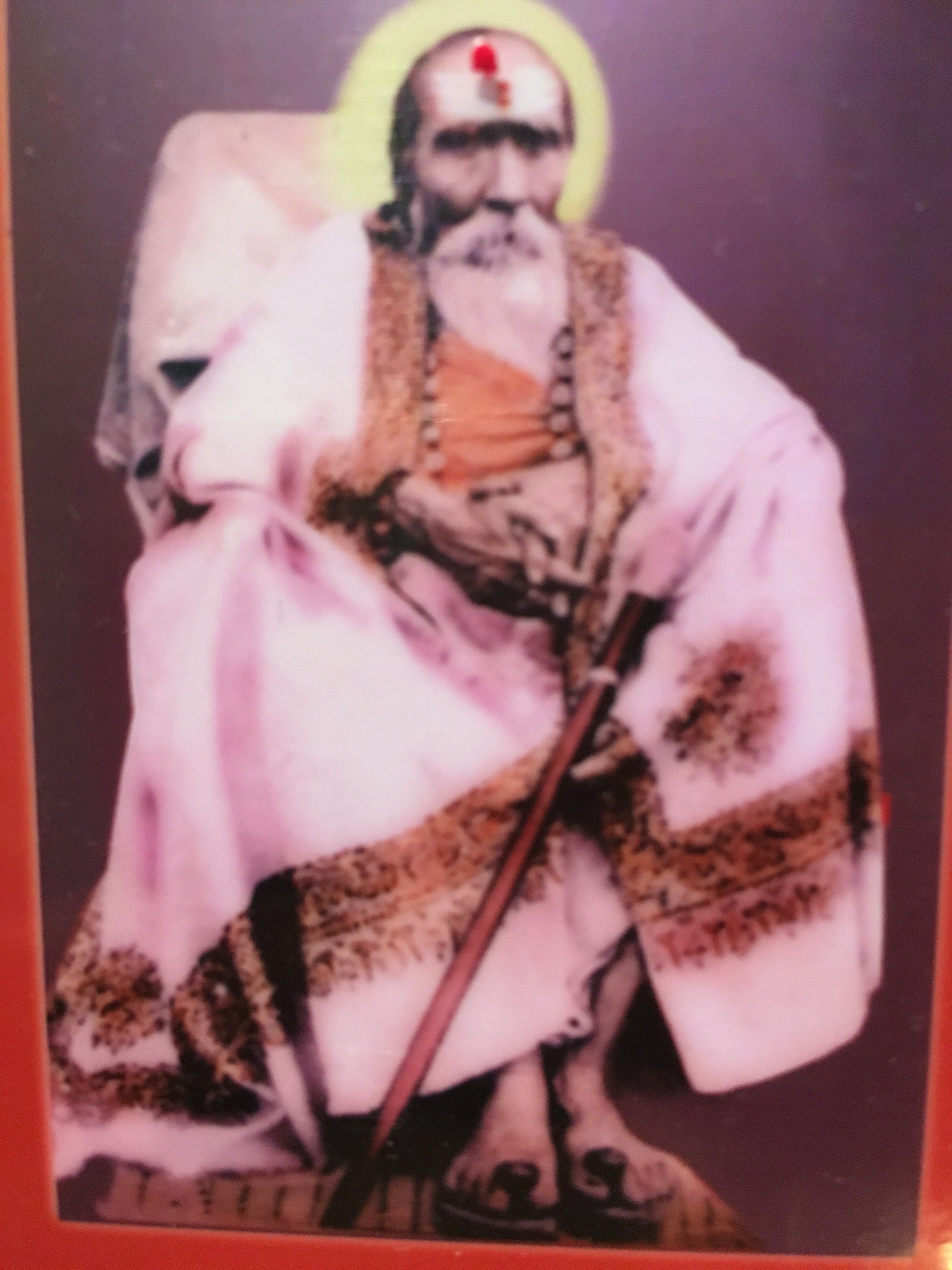 He lived in his mortal body for more than 100 years and never wore any sewn clothes or shoes as in Hindu philosophy sewn clothes are not recommended for people aspiring for higher spiritual growth.

Shri Ganpatramji was main disciple of Shri Sitaram Bhatt ji of Pune (https://aishwaryanand.com/2017/12/11/shri-vidya-guru-shri-sitaramji-bhatt/). It is said that when Shri Sitaram Guruji on the edge of Mahasamadhi (casting off his physical body) his all Shishyas (Students) came to see him. Shri Ganpatram dada came and did his puja and drunk the Charnamrut of Shri Sitaramji and all the powers and knowledge got transferred into Shri Ganpatramji. It was unknown to other students so the students asked, ” Guruji (Sitaramji) ! Do you want to say (give any further knowledge which is still available to you) anything?” Guruji said, “All the knowledge is went to Gujarat with Ganpatramji”. He was a carrier of  complete and correct(without any misinterpretations)  knowledge of Shri Vidya Parampara of 100s of years. He was the one who could correct the Shankaracharya in many matters of philosophy.

Shri Ganapatram Dave was a great scholar, actually one of the greatest Vedantists of the time and was bestowed the title Ved Martand Tantra Shiromani by Dwarka Shankaracharya.

Apart for running a Gurukul for Vedas, Guruji was the trusted advisor to the Kings of Gujarat and advised the installation of the Bhuvaneshwari Amba Murthi in Gondal.  The purpose of this was to aid the struggle for independence from the British Raj.  He was known throughout India as one of the greatest Tantriks of the Century and even today holy places like Kamakhya to Rameshearam still carry his memories.

His main shishya to whom Guruju passed the Gurugadi to was Shri Devshankar Trivedi of Sanand and Raja Jayvant Singh, renouned Kali Upasak and King of Sanand.

Famous for his contribution to the world of classical musical he gave the World many new ragas and compositions to enjoy.

His main shishya to who Guruji passed the Gurugadi to was Shri Devshankar Trivedi of Sanand. Guruji was the one of the greatest Kaulupasakas of the time and gave Diksha to and guided many in Shri and Kali Kul. A prime example was Raja JayawantSingh (king of Sanand), who was frequently visited in the palace by Adhya and Batuknath and created many ragas and compositions. Another shisya is the great PanditJasraj, of the famous mewathigharana, famous for his contribution to the world of classical music.

Gurudev wrote the Shri Vidya Mani Ratna Saparya Padhati in the 1800s, which is still used today. Furthermore, the Ambaji Shri yantra was reinstalled by him and as a result has many shisiyas in Siddhpur and Kamakhya. During his life he had met up with Pujya Gurudev Shri Devi Ba and was taken aback by her devotion. He wished to give her Diksha but unfortunately they never met after this. Gurudev lived for over 100 years after which he achieved Manidweep.

This site uses Akismet to reduce spam. Learn how your comment data is processed.

My Tweets
Join 333 other followers
Follow Shri Vidya on WordPress.com